Picture from Flickr:  (Peter Joseph, Jacque Fresco and Roxanne Meadows, founders of The Zeitgeist Movement and The Venus Project respectively)


Yes, they presented brilliant ideas that are able to awaken people up from today's societal problems and to offer the solution of curing them once and for all. But this sudden conflict had shown that they themselves are also the same old victims of culture just like we are.


It all started when I saw the video of Jacque denouncing The Zeitgeist Movement, saying that the movement doesn't really know much about the concept of the Resouce-based Economy they present, and they don't follow up the directions that they want, and now they are not allowed to promote the RBE concept with their designs, while leaving them to go out their own way and etc. It did shocked me with disappointment. Next thing I know was someone sharing an audio clip on Roxanne Meadows of The Venus Project adding more fuel to the existing fire both sides are in.


It's really sad and funny to know the fact that they are founders of a wonderful idea that attempts to redesign the current culture we are in, while they THEMSELVES are being conformed into it without even realizing it. Hence they failed to hold on 100% on what they had preached, specially on their views on ownership.


They were at first great in collaboration, they managed to present their new ideas to change the current paradigm for the better. It does sounds sensible for us to live in a world without the oppression of money, while creating a scientific-based self-governing society that encourages collaboration and self-actualization for everyone. No poverty, no war, etc. It's really sad to acknowledge such a thing happen, and to be honest, it's like any political conflicts you see in the current world - scandals, quarrels, finger-pointings, yellings, bashings, etc.


Now, to those who like the idea and wanted to see it being a reality, do continue to do what you are doing for this idea to be heard more. Honestly, we can't afford to continue living like this. There are many people out there wanting and hoping for a miracle/ salvation to kick in and rescue us as a whole. Everyone is oppressed and stressed. There are unsounded tears and fears around us that isn't seen physically, because people don't tend to express them much, instead they hide it in their smile, which is essential to survive everyday.


Sometimes, after some discussions with some of my friends and lecturers about this new idea for the next social transition, I kept on thinking, what if the global economy shuts down today, and there's an anarchy in between?

In other words, can the real social concerned people afford not to continue spreading such a sensible solution for the world? There is no much time left actually.


The only thing I hope right now is - such conflicts better be resolved in the near future. At first it was okay with collaboration, now they are under the smog of egoism and ownership. Seriously, their ideas are so far the most sensible I had heard of to date, and I felt deeply frustrated when I heard that their advocators themselves fall to the culture of today's world.
Pixelated at around err.... 4/20/2011 04:11:00 PM 4 comments:

Email ThisBlogThis!Share to TwitterShare to FacebookShare to Pinterest
It's About zeitgeist

Imagine A World Without Money - The Free World Charter

A few months ago I stumbled upon this video clip. And this video showed us how much money is getting irrelevant to our social living due to the growth of technology, the monetary system's flaws itself and our understandings on science based on the problems we faced.


Without mentioning a lot about the clip - Do watch this clip with an open mind. SHARE it when you agree with the idea of it: A Post-Scarcity Era.

For more information, do click this -> link and learn more about the flaws of the current world. Hopefully you will learn more insights about this world we are living in. It's up to the people to determine their own fates.

Living in Malaysia is Really Expensive! 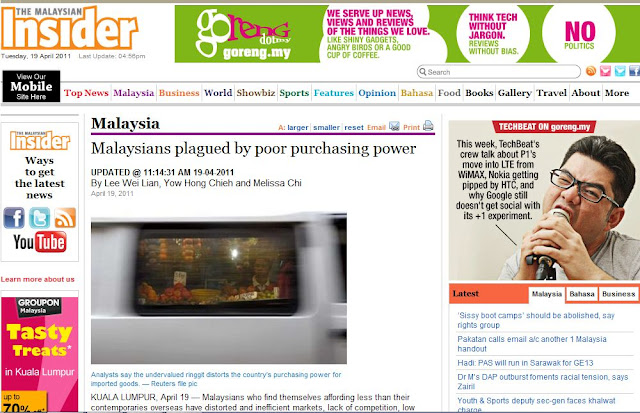 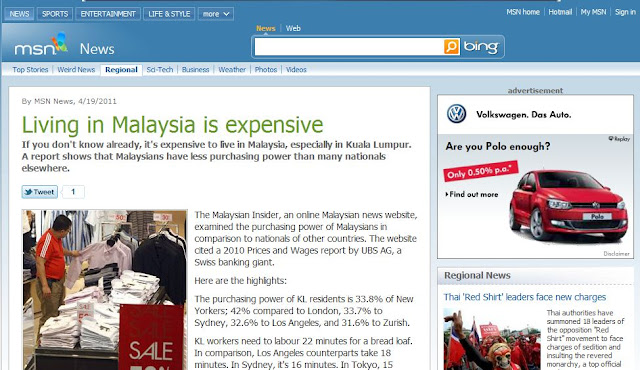 Today, the truth has been released. During the beginning of March, I realized that the food prices here are slightly higher than usual. I usually spend around RM 12 per day on thrifty mode for food alone, however it has gone up to RM 16 per day in expenses. A few items I find in the supermarkets also managed to rise, and sometimes, that made me think if the rest of the people realize this fact earlier.
And I even heard that in Sabah, where our incomes are not as much as the ones in Kuala Lumpur, there are even restaurants charge food as expensive as RM 7! In my hometown, Tawau, where 50% of the population are low income workers, price for food had been skyrocketing, specially on the restaurant sectors.
Sometimes I doubt if people still tend to accept the rising price trends. I heard many have ranted, but they just accept these facts as what they are.
It's really annoying when politicians only tend to rally against each other, and to ridicule themselves at the same time seeking for people's votes, while everyone else quarrel against each other meaninglessly, while thinking about themselves despite the fact that we are all in this together.
The truth is -
I had been reading many "doomsday" articles that stated more civil unrests around the world to be unfold, the rising of the global crude oil price due to the protests in the Middle East, a next cycle of financial crisis to come, more inflation, more debts arise, and the collapse of the financial system. This is truly the cancer stage of capitalism.
So, people - This isn't a joke. From now on, if you have a piece of land, make use of it to grow your own plants. Encourage your neighbours to do the same and share the food together. Make the practice viral. Stop supporting the system! To those who don't have a land, well, spend less. I have no ultimate solutions, but this is the first step to achieve one.
The current money oriented world we are in segregates us from a personal level. To establish a resource-based society, surely you will enjoy sincere relationships better, instead of being under an invisible prison chasing after bills and work and compete like a cow to survive.
Read the articles from : MSN and Malaysian Insider. You will learn more about them.
Pixelated at around err.... 4/19/2011 05:42:00 PM 4 comments:

I think this would be a just-pictures post on what I did today during the fair. Guess what, this is actually the first time I'd been to the PIKOM PC Fair in KLCC. The other two experiences being in that event was in my hometown, Tawau, Sabah.


I guess my scope will be on the models (yes, it is!) and I bet there will be thousands of others blogs doing the same thing. At the end of the day, I snapped many pictures of them and spent RM 51 on a speaker and a card reader at the same time. It was a long walk, though.

First photo taken out from my Nikon D80.

The front promoter of the online games session. She's quite elegant to me.

Kawaii girl - She's in my top 3 list among the unique promoters there.

This is as if I'm taking a pic of a race queen.

Model of Sensonic, and I like their portable speakers a lot.

Model of Panasonic booth, and gosh! I left them out, missed the Panasonic GF2.

Well, it's hard to be in the midst of a crowd crossfire, but luckily this one is one great shot.

The Avira nurse. I believe the previous Avira girl was prettier, not to mention it was Careen Tan who became that nurse last year. But the nurse custome is already stunning enough.

Want a close up? Haha, I bet you want!

Another Sensonic pair of sensation! 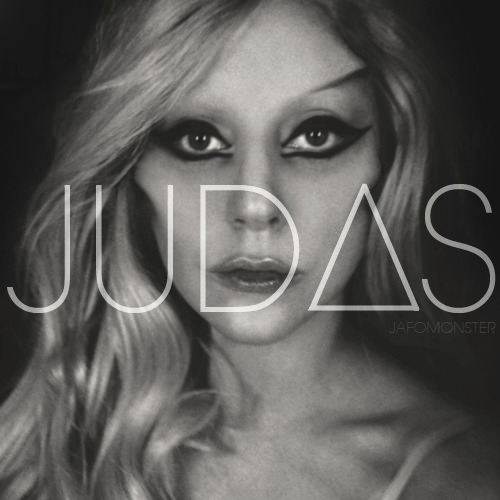 How ironic. The song Judas, sang by Lady Gaga, was released into the Internet a week before the Holy Week, the Christian week of Palm Sunday, Maundy Thursday, Good Friday and Easter Sunday. And her "demonized" message is getting more and more clearer as what the Illuminati conspiracy theorists had said about her.


For your information, Judas, or Judas Iscariot, is one of Jesus' 12 disciples in the Bible. What distinguished Judas from the other eleven disciples is Judas is the betrayer of Jesus that led Christ to be crucified. After knowing his own misdeed, Judas felt guilty after receiving the rewards he got and committed suicide (according to the Gospel of Matthew) by hanging on a tree.


Now that you know the Biblical facts about Judas, can you tell why Lady Gaga still loves Judas so much?


Look at the lyrics:

I wanna love you,
But something's pulling me away from you
Jesus is my virtue,
Judas is the demon I cling to
I cling to


Wanna learn more about the Illuminati issue in music? Visit http://vigilantcitizen.com/ and don't be too surprised about it. Mainstream music has lost their values in time, seriously.

Photo was taken during the Putrajaya Hot Air Balloon event when there's no huge balloons around with the Sony NEX-5 and Nikkor 50mm F1.8 lens.


It's been a while I never update my blog, and now I managed to put an effort to update one post. Assignment's tough, but things will be over at the end of the day.