It's been a week I had been knowing Rebecca Black in the Twitter's top trend, and during the second day she was in the trends, I got to know her latest "Friday" song.


Don't know the song yet? Here's the video clip of Friday.


My first impression towards the song is  - "Why screech at the beginning?" With such a bad start at the beginning of the song, you can't attract many listeners. Even the video clip had a bad illustration/sketchings of Rebecca herself. You could have present it a lil' more creative.


So, my score given to the song is 2 out of 5, still Friday had a catchy tune, and that's the only good thing of it.


But the good thing is she managed to get some 35 million views within a month. Let's hope she can beat Katy Perry's Fireworks (147 million views now). Not even Ryan Higa can beat her views.


If you're asking if I will hate her for that song, I'll say, there's no point to be a hater. Just appreciate it and stop ranting about the song if you don't like it. Someone else still loves it. Oh ya, this is Ryan Higa's view on Friday.


No worries, Rebecca. You will do fine. I hope Ryan Higa will make another video out of "Friday".

This was taken during my 21st birthday. It was as if it happened a few weeks ago. And I don't think I had changed any of my style ever since, except for the fact that I'm using the Sony NEX-5 more than the Nikon D80.


However, this year there's no celebration. One of the reasons why is I'm not sure about the other CMM-ers' timetable, thus it's harder to coordinate. Our bonds are still very strong last year, this year, things are a little bit different. Still, I missed the togetherness during our first semester.


On old friends? That's even harder, because we're living far from each other. Recently one of them had shifted to Damansara. Boy, how are we going to meet up?


But anyway, I feel that it's worth spending extra time in Facebook and Twitter to reply all those who wished me a great birthday. 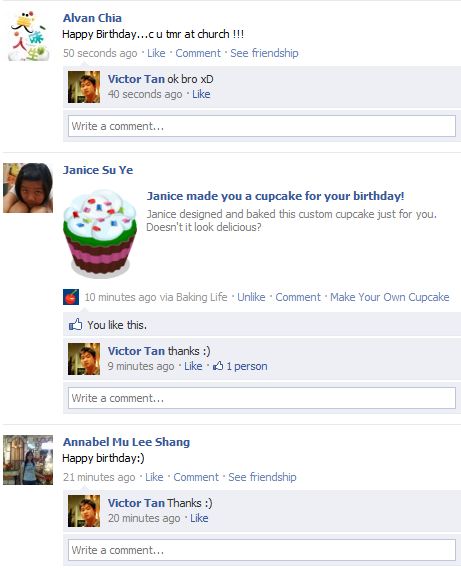 Well, to the other Facebookers, if that day is your birthday, and multiple messages come flooding over your Wall Post, let them be. No need to deactivate your account for a day. It gives you extra joy if you appreciate it. Plus, you got to show the appreciation for those who wish you the best for your birthday by replying them, NOT the copy paste style, unless you're too busy with your job out there. At least dedicate a status thanking all of them if you're really in that busy-ness. Give a feedback of appreciation. :)

A Racist Aussie Girl Said That Durians Are For "Jungle People"? Ridiculous!

I know. It's been a while I didn't update my blog, as I'm losing the mood. 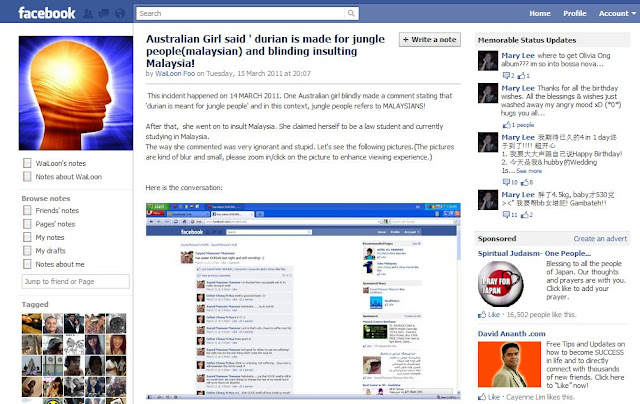 Until this NEWS showed up last night in my Facebook live feed!


Anyway, this is about a racist Australian girl who is current studying in one of our private education institutions who was caught speaking racist notions against we Malaysians, and later she kept going on criticizing our races and culture in a very ignorant manner.


Of course I was slightly provoked by her words, but I know it's pointless to feed some trolls who wanted to gain attention in a negatively manner.


What made me feel funny on how she stupified her own image was she had revealed that she's studying in Malaysia and she even study LAW right here. C'mon, spoiled kiddo! If you study law, you should realize that you MUST obey the law in the country you're in. Don't you learn about the idiom "When in Rome, do what the Romans do"?


FACT: Nobody is above the law! And you must respect the law of the place you're residing.


And secondly, based on her Facebook profile, she mentioned that her religious view is on the Catholic faith, and her favourite book is the Bible.


But her attitude doesn't resemble a real Christian. Speaking foul words? Insulting other groups of people without rationality? Being egoistic as if you're from a higher social class? Pissing other people off in other people's land?


Matthew 19:19 Love thy neighbour as thyself!

Remember, it's not my words, that was said by Jesus. Please repent, before things get worse for you. Even if it's so, it's because of your own doing. It's unnecessary to start a fight that waste everyone's time in the Internet. Don't like Malaysia, then just leave. Nobody cares about your presence here.


If you want happiness, then share the happiness to everyone you know here. If you retaliate with hate, then hate will knock at your door. So, please practice courteous values when you're in other people's places.


Last but not least, Angeline:


You're representing the identity of your nation, place of origin, and your own religion. I hope I made it clear to you, that you are holding the responsibility that represents the things that you're affiliated of.

As expected, this new semester is kinda gloomy. There are lesser classmates I know, and we're stuck with students between the previous and the later intakes. You won't get to know them much because they are very bonded with the ones of their kind. And I can say that we're deserted.

That's why I chose to edit the photo into such theme. Just hope everything's fine within this period of time.


P.S - HDR is something new to me. This one's still fine.

*P.S - I finally got my blogging mood, so I'll try to update this as fast as I can before the mood disappears.


Chinese New Year 2011 may have a short three-day open house period. But we old friends made it one great celebration worth to remember this year. We tried to make it as fun as possible meeting each other to revive those friendships we had in high school. And I'm happy of course for everything that has planned.

My old friends' gathering began 2 days before the Chinese New Year when some of us old friends went for yum cha at Kubota Square - Tawau's new hangout place, particular for the young.

I think I should have used the standard lens for this photo. Haiz.


Anyway, we chatted about many stuffs, and that included how we would go open houses within a shorter period of time before everyone left Tawau. And the funniest thing was when Fang Yee showed us Cayenne's CNY themed photoshoot to us via her iPhone. Lols.


And CNY Day began with a church service, and there was even performances from 2 renowned singers. I only know one of them was Pink Tan.

Too bad I'm not good enough in manual focusing that time. But anyway, after that morning. I received an invitation from Ivan Lee via facebook status to visit his house for CNY. And there we were that evening (to be continued):

That night, Khoo Chun Yi, Tony, Shim, Fang Yee, Liau and I went to Pang Yih Fui's place, who is another ex-classmate of mine. We went there until 12 am, and that's where I played cards for the first time during CNY. No gambling though. Haha...

The next day, we went to Fang Yee's place for open house. That's how we began the 2nd open house campaign. :)

After some group photos and a few chats, it's Mason Hiew's place. That was the first time I entered Mason's house. And surprisingly, there were a lot of people in that house. And yes, I even met my long lost friend whom I was very close to - Ah Khiang, now working in Tawau.

And I even took these photos during their Lion Dance events.

I went back at 5 pm for a relative dinner. But I saved my energy for the third day.

With a different group of people this time, which consisted of Ivan, Angela, Mei Chi, Debrianty, who was also present in Mason and Ivan's house, we began the final day open house visits together in my house.

Next, we visited Lucas, Angela and finally, Khoo's house.